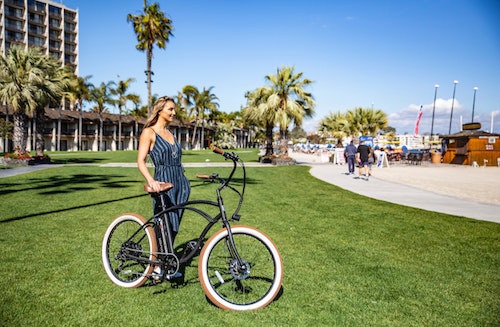 Electric bikes seem exciting. And for good reason! Nothing beats the feeling of cruising along on an electric bike, and it is a great environmentally conscious form of transportation, especially for anyone looking to speed up their daily commute. Still, there are plenty of unanswered questions about electric bikes, and we’re here to answer some of the most common concerns, so you can get in the know about this fantastic method of travel.

How Do Electric Bikes Work?

The easiest answer to this question is that an electric bike uses a motor in the back wheel or center of the bike to propel the bike forward. This motor is run off of a battery, usually a lithium-ion battery, as they last longer than nickel-based batteries. There are two main types of electric bikes: full-power and power-assist.

Full-powered electric bikes are just that, fully powered. These bikes tend to be on the heavier side and are made to travel for shorter distances without a need to pedal. The downside to these bikes is that they tend to go shorter distances than power-assist bikes and can’t be pedaled once they run out of battery because of how the motor works.

How Much Do Electric Bikes Cost?

As with any piece of technology, the price for an electric bike varies on the type of bike you invest in. Electric bikes can run from a couple hundred to thousands of dollars, but the investment is well-worth it. Not only can an electric bike reduce the amount of money you spend on gas, a single charge for your bike can go for miles, meaning you get more distance for less money. Charging the average electric bike takes under a couple dollars in most cases and can drive up to 90 miles depending on the bike. That’s much cheaper than a tank full of gas!

One thing to consider is the maintenance costs, as it is recommended you do a full checkup on your bike every 500 miles. Still, this should only cost between $75 and $100, which is far less than you pay with maintenance on your car.

Overall, an electric bike is a relatively cost-effective investment, and the initial cost of buying the bike more than pays for itself when you consider the gas or other forms of transportation you would be using otherwise.

How Fast do Electric Bikes Go?

Do You Need a License for an Electric Bike?

The laws for electric bikes are as varied as the places you can use them. Many countries have their own ordinances for electric bikes, and individual states have different laws depending on the type of bike. In general, it’s a good idea to research your local government to find out the laws and regulations for riding electric bikes. However, it is incredibly rare for an area to require you to have a license for your electric bike, but there may be age restrictions on their use.

As with any form of vehicle, following the local laws is the best way to ensure your safety, as well as the safety of those around you. Be sure to obey any signaling guidelines needed for operating your bike, and to wear the suggested protective gear.

How to Build an Electric Bike

Most electric bike batteries range from 24 to 72 volts, with the larger batteries adding more power but weighing down your bike significantly. You also want to choose what capacity you’d like for your battery, which means how long you can go between charging cycles. Thankfully, choosing the right battery is one of the more difficult parts of building an electric bike, and the installation is much simpler than debating over the right battery to choose.